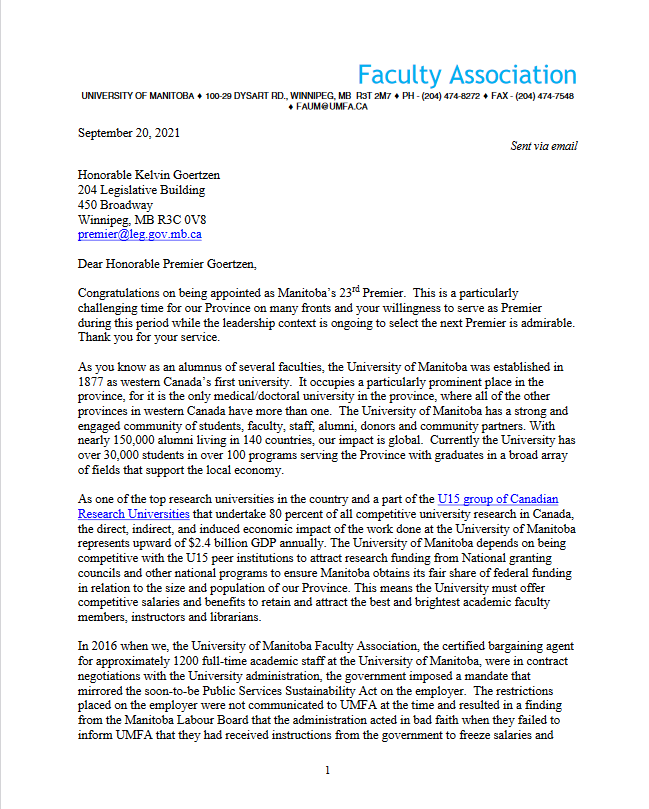 UMFA is once again entering a bargaining round, attempting to negotiate a contract with an employer hamstrung by a hostile government. Like other public sector unions subject to the Public Sector Sustainability Act (PSSA), we find ourselves with deflated wages that will not see movement without sustained, intense pressure on the provincial government itself, in addition to all the things we have to do to show the University administration that we’re serious about the changes we need to see at the U of M.

Who is the barrier to achieving a salary increase?

The University President has explicitly said in the University Senate that UMFA salaries are 8% too low, but also said the government has not given a mandate to the University to provide salary increases.1

The government’s commitment to this position -- which it’s held since at least 2016 -- was confirmed by its reaction to the COVID stipend negotiated in November 2020: a dollar amount roughly equal to the total cost of the UMFA COVID stipend was subsequently removed from monies allocated to the UM by the government through the “Transition Support Fund”. That fund was itself taken from the University grant shortly after the pandemic hit, then (partially) returned after being earmarked for costs associated with the pandemic, online teaching, and “labour market alignment”.

Who in the public sector has received wage increases in the last 4 years?

Manitoba Hydro workers, represented by the International Brotherhood of Electrical Workers (IBEW) Local 2034, have been asking for salary raises for several years. They, too, have been subjected to the PSSA. Things came to a head this March, when the IBEW decided it had to set up picket lines to make gains at the bargaining table. Their employer has continued to refuse to deviate from the government’s mandate on wages, however -- Hydro workers are still on strike.

The only salary increases provided to workers subject to the PSSA in the last four years have come through legal access to arbitration, or through doors opened by previous successful arbitrations. This includes unions that had the Labour Board write their contracts after lengthy strikes (The Winnipeg School Division Bus Drivers) and branches of the Manitoba Teachers’ Society that have legally-mandated access to arbitration to resolve collective bargaining disputes. While arbitrated settlements at two School Boards induced other Boards to make salary offers to their teachers, the Manitoba Government Employees Union (MGEU), which also has legally-mandated access to arbitration, had to fight in the courts for almost two years to have that access granted. This was because the government was unlawfully blocking their progress.

In 2016 UMFA proposed arbitration, but the administration refused because the Government wouldn’t give them a mandate to seek a neutral third-party’s binding decision on salary. A similar proposal was rebuffed by the administration in 2020, for similar reasons.

What about all the other improvements that I want to see at the U of M?

This round of bargaining is about the Collective Agreement as a whole. The bargaining survey will be coming to your inbox soon, and constituency meetings have already started. The Collective Agreement Committee will combine all it learns from the survey and these meetings with all the grievance work that’s been done over the past three and more years to work up bargaining proposals. Those proposals will be presented to everyone for debate and a vote at a Special General Meeting to be called for early this summer.

What about the PSSA? Where does UMFA fit in the context of other public sector unions?

In 2017 UMFA joined the Partnership to Defend Public Services (PDPS) to launch a legal challenge of the Public Services Sustainability Act (PSSA).  As university workers aren’t technically public servants (the U of M is autonomous from the government, and about half of the operating budget comes from non-governmental sources), the government had to specifically target U of M employees in its austerity plans. This was true of others, too. The PDPS is for this reason composed of many union locals, large and small -- some no bigger than 3 people (IATSE Local 63 represents stagehands at Centennial Concert Hall), and others representing thousands of workers (the Manitoba Teachers’ Society has about 15,000 members).

With our pooled resources the PDPS won its constitutional challenge to the PSSA at Manitoba Court of Queen’s Bench, in a ruling that characterized the legislation as “draconian.” Justice McKelvey, in her ruling, said:

“The PSSA has left no room for a meaningful collective bargaining process on issues of crucial importance to union memberships. There is no ability to promote representations and have them considered on a good faith basis. The right to meaningfully associate in pursuit of a fundamental and important workplace goal has been denied.”

However, the provincial government is appealing that ruling and arguments from both sides will be heard this summer. The results of the appeal process may not be available for months, and even then the government might be able to appeal to a higher court, extending our wait-time even longer -- potentially for years.

In the meantime, the government’s treatment of Manitoba’s teachers, the IBEW, the MGEU, and other public sector unions suggests that they have little intention of changing their approach to collective bargaining in the public sector.

What are we doing to overcome these barriers?

As in past rounds of bargaining, many of the gains made at the table require a lot of organizing, including preparations for job action. This year we have to prepare on two fronts -- for the work we have to do with the employer at the bargaining table, and for direct and sustained pressure on the provincial government itself.

To begin this work, we have joined together with other provincial faculty associations via the Manitoba Organization of Faculty Associations (MOFA) and have started work on a province-wide political campaign supporting higher education.

We have begun working to prepare every one of our colleagues to meet with MLAs and apply pressure to individual members of the government and Board of Governors. This will unfold over the next few months.

We will also be providing members with opportunities to educate themselves, so that they will be able to respond to public inquiries, students, the over-the-fence conversations with neighbours, etc.

What can we do right now?

Make time for a constituency meeting. The Bargaining Team (BT) is asking UMFA Board Representatives to call constituency meetings to talk about next steps. When your rep calls a meeting, make every effort to attend. If you don’t have a rep, contact fThis email address is being protected from spambots. You need JavaScript enabled to view it. and UMFA staff will help organize a meeting in your unit.

Come to the Annual General Meeting. The AGM has been rescheduled for May 25 @ 2pm and will be held online. At that meeting there will be discussions of bargaining strategy, organizing strategies, and more.

Get Involved with MOFA. MOFA has a number of committees that need help. You can view information here: http://mofa-fapum.mb.ca/issues/call-for-nominations-for-mofa-committees/ and volunteer by emailing This email address is being protected from spambots. You need JavaScript enabled to view it..

Questions, Comments, or Concerns? Contact the UMFA Office -- This email address is being protected from spambots. You need JavaScript enabled to view it. / 204.474.8272

As we continue our preparations for bargaining 2021, here’s a refresher on how the bargaining process works. 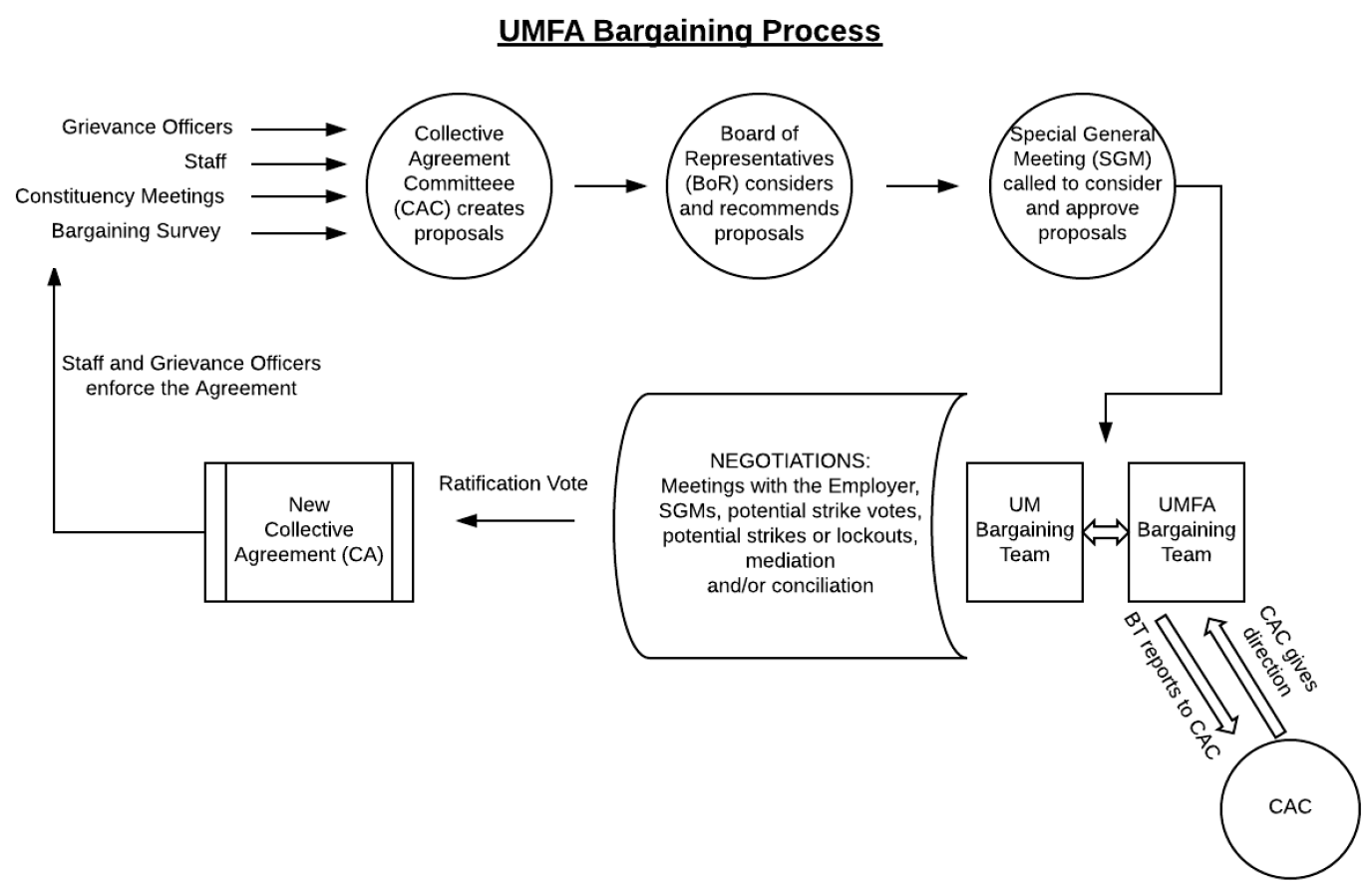