Since 2016 the Association has had to rely on a strike, filing a complaint at the Manitoba Labour Board, and eventually legal action at Manitoba’s Court of Queen’s Bench to attempt to resolve issues created by the Conservative Government’s interference in collective agreement negotiations. But that’s not all: not long after the ending of the strike in 2016 the Association was forced to file three grievances to secure one of the gains made at the bargaining table. In three faculties (Architecture, Arts, and Education) the Teaching Workload Guidelines process, which was to ensure that Members had a collegial process by which to determine how teaching loads would be determined in their units, resulted in ‘loophole’ language that would allow Deans to increase teaching loads irrespective of the rules set out in the guidelines.  For a complete account, click the document below. 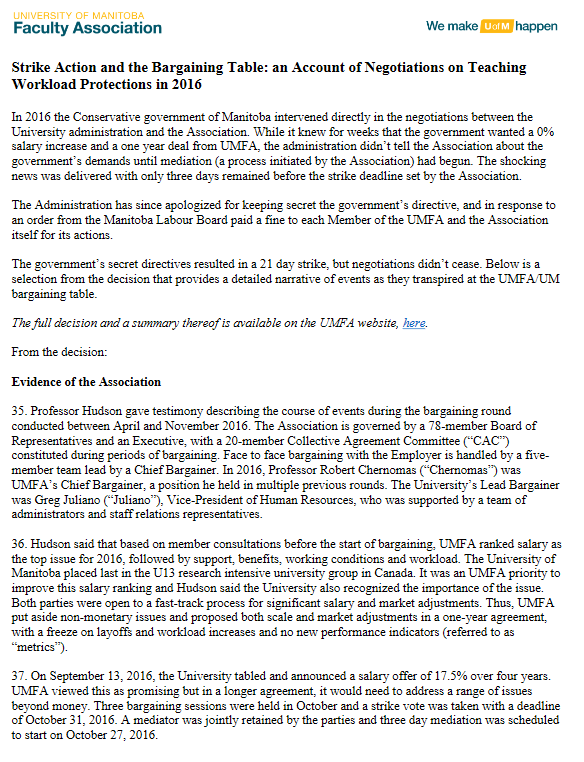 The full arbitration document can be read here.

How BUFA Organized to Win! – 30 Minutes with Professor Larry Savage
In this short address to UMFA members Professor Larry Savage describes the strategies and tactics the members of the Brock University Faculty Association (BUFA) used to engage their colleagues in the bargaining process and negotiate significant improvements to their working lives.

To review some of BUFA’s bargaining updates, as discussed in Prof. Savage’s talk, check out the BUFA website: https://www.bufa.ca/category/collective-bargaining/.

Larry Savage is a Professor in the Department of Labour Studies at Brock University in St. Catharines, Ontario. His teaching and research is focused on collective bargaining, union strategy, and labour politics. He is currently the Principal Investigator on a SSHRC-funded Insight Grant exploring academic unions, collective bargaining, and contract academic faculty.

Professor Savage is also a faculty union activist himself, having served in various positions in the Brock University Faculty Association (BUFA), including as Chief Negotiator in the last two rounds of bargaining. He is also a former member of the Executive Council of the Ontario Federation of Labour.

Professor Savage has published six books on the Canadian labour movement, including his latest co-edited book with Stephanie Ross, Labour Under Attack: Anti-Unionism in Canada.

Brought to you by UMFA’s Organizing and Communications Committee (OCC), with the support of the Canadian Association of University Teachers (CAUT).

Bargaining: How it Works and How We Can Win

Where did Collective Bargaining Come from?
Dr. Julie Guard, Departments of History and Labour Studies