On Thursday April 16, 2020, the Provincial government of Brian Pallister directed the public universities to prepare budgets for the 2020/21 fiscal year with cuts to salaries of 10%, 20% and even 30%, to be submitted by Tuesday April 21, 2020. Universities had five days to plan the demolition of institutions that took many decades to build. This is part of Mr. Pallister’s broader policy of reducing the cost of the public sector, a Conservative agenda even prior to the COVID-19 crisis.

We recognize the severity and urgency of this situation and are readily awaiting the opportunity to apply our expertise to find a workable, economic solution. However, we reject Mr. Pallister’s decision to expand austerity during this economic crisis. It is out of step with what is going on in most provinces, indeed across most of the western world, and with recommendations of economists about how to survive a recession.

Those worst affected in the short-term by Mr. Pallister’s decision will be Manitoba’s youth. The job market for 15 to 24 year olds has dried up during the pandemic, and federal aid for Canadians facing financial ruin, while doing enormous good, left out students. A later federal plan to cover 100% of wages for student jobs only works if there are jobs waiting: there are not.

Historically, university enrolments grow during hard times as young people and others displaced from work train and prepare for jobs that will emerge as the economy recovers, sooner rather than later under prudent leadership. Yet at this time when universities are most needed by Manitobans, during an unprecedented economic storm, Mr. Pallister chooses to dismantle the storm shelters, our universities.

Moreover, the proposed levels of cuts will inflict permanent structural damage on our public universities, undermining their capacity to educate and conduct research for decades to come. The provincial government has expressed its desire to impose the maximum 30% cut. At that level, neither Brandon University or the University of Winnipeg can survive as full-fledged universities. The status of Université de Saint Boniface is less clear. The University of Manitoba might survive, but it’s already cut its faculty budgets year after year, and even more budget cuts will make it a shell of its former self. Even a 10% cut will be similarly devastating. This is an attack on public education.

We therefore reject Mr. Pallister’s agenda of cutting expenditures on such essential services during these perilous times: Mr. Pallister himself admitted that cuts to the public sector would cover only a dime of every dollar of deficit financing needed to see Manitoba through the crisis. That level of saving is not worth gutting institutions that are an essential part of the economy and social fabric of Manitoba.

A much better solution is to start reversing the cuts to Post-Secondary Education ushered in since the 1990s. As one University of Manitoba Professor has shown, every dollar in reduction to the deficit could reduce GDP by $1.70 – which means the government’s plans could unnecessarily cost Manitoba’s economy over $200 million. As in Quebec and Ontario, he argues that a better solution is to “break the vicious cycle of reduced spending and income by leaning into the wind and spending more in times of crisis.”

Instead of imposing Draconian and short-sighted measures to solve an immediate problem at greater long-term cost, we urge Mr. Pallister and Minister Eichler to invest in Post-Secondary Education, a solution that will protect our institutions, economy, and the future of our youth.

Prof. Shiu-Yik Au: “Austerity is the wrong path for Manitoba during coronavirus pandemic: U of M professor”. 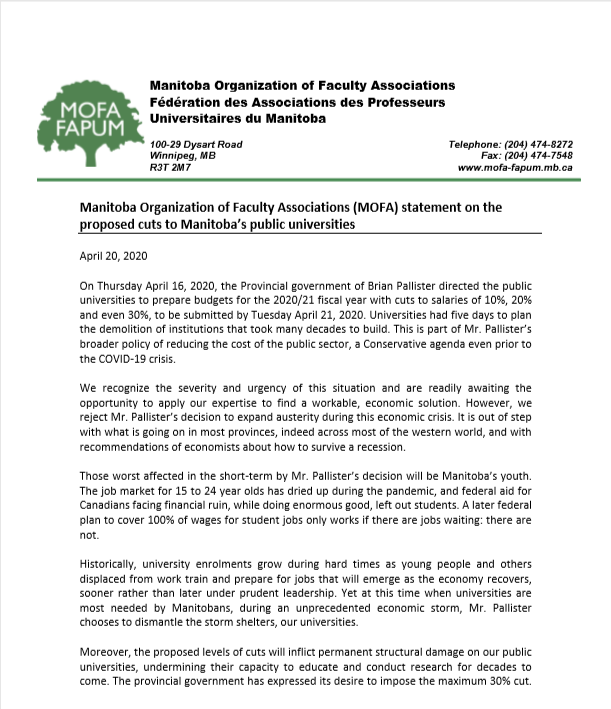